As everyone finishes trimming their trees and making holiday plans, here is our own top-10 list of Santa related trademarks we found to be registered in Canada. Those of us who still “believe” would be sad to know that Santa does not own any of them!

and at Number 1, a mark that we think Santa should try to obtain, is a mark that was originally registered as number 798 on the Newfoundland Register in 1919, before Newfoundland became part of Canada. It is a beautiful design that I regretfully say has not appeared under my tree to date – but I hold out hope for a new pair of long johns this year under the mark: 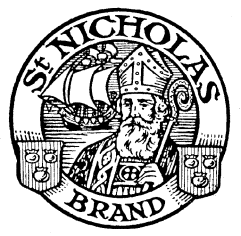 The St. Nicholas Brand design is registered in relation to hosiery and underclothing. The official description of the mark is as follows:

And if any of my family members want to know, red would be perfect. Of course.

Happy Holidays to everyone!